Tap is our inexpensive, pocket-sized, battery-powered time clock for out in the field or on a desktop. It's a great little device that can be used in all kinds of ways, from tracking employee hours to keeping track of the number of hours a machine has been used.

A Tap clock (with its accompanying USB cable) costs just $169 and gives your employees another place to clock in and out. They’ll use the same iButtons and the TimePilot software you currently use handles the transactions.

To download the data the clock collects, simply plug it into the PC running the TimePilot software. When it’s plugged in, the software also updates the time on the clock and recharges the battery.

There are lots of ways to use Tap clocks. Many businesses leave the Tap on a desktop, cabled to a PC, so that employees walking past can clock in and out. 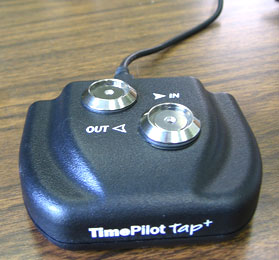 Here are some of the benefits to using the Tap+ in this way:

In an especially creative use, football coaches use Tap clocks in the weight room to ensure that their athletes are getting their weightlifting in each day.

Other possible uses are described in this excerpt from a past newsletter:

Phil Gallagher’s eight employees clock in and out daily at a TimePilot Vetro at his workshop. They use five types of portable power tools in his workshop, and each tool is used at a different step in the manufacturing process. When they need to use a power tool, each employee retrieves it from a storage closet in the shop. Phil would like to see how much time each employee takes with each tool.

Phil buys a 5-pack of TimePilot Tap clocks for $749. (He doesn’t need a Tap+ Starter Kit because he received the TimePilot Central software when he bought his Vetro and his employees already use iButtons.)

When he sets up the Tap+ clocks, he assigns each of the five Tap+ clocks the name of one of the power tools. Then he labels each of the clocks with the name of that power tool. To make it easier for his workers, he covers the “In” that’s printed on the front of the clock with a label reading “Taking” and covers the “Out” on the clock with a label reading “Returning.” Finally, he uses Velcro tape to attach each battery-powered clock to the shelf next to the appropriate tools.

When an employee removes a tool from the closet, he taps his iButton to the “Taking” probe on that tool’s Tap+ clock. When he returns it, he taps the “Returning” probe. At the end of the week, Phil collects the five clocks and downloads the data they collected. In TimePilot Central, each transactions is labeled with the name of the clock, so he can quickly see when a particular employee “checked out” a tool and when he checked it back in.

Phil found an additional benefit to this system: When a power tool is missing, he can tell who used it last.

Mary will place a battery-powered TimePilot Tap clock in each client’s home. An aide will clock in at the client’s Tap+ clock when he or she arrives and clock out when they leave.

Mary buys 20 TimePilot Tap+ clocks for less than $2,500 and iButtons for each aide. (She received a discount from the list prices; if you’re buying that many clocks, just ask us!)

When she sets up each clock in her TimePilot Central software, she assigns it the last name of a client. As clients change, she can change the clock’s name with just a few clicks. iButtons can also be reassigned as employees leave the company and new ones are hired.

Aides clock in and clock out during the week. Once a week an aide brings the clock back to the office, where it takes just seconds to download the data into TimePilot Central. Alternatively, a supervisor can visit the client periodically and download the data straight to a laptop.

With all the data now in TimePilot Central, Mary can see exactly how much time each aide is spending at each client and adjust their schedules accordingly.

XYZ Grinding Co. has a precision surface grinding machine that needs to be lubricated after every 100 hours of use. The pencil-and-paper method of keeping track of the hours has been hit-or-miss, and XYZ Grinding needs more accuracy.

Want to learn more? Here is the quick start guide that shows exactly how you'd set things up.

Ready to buy? Here's a link to the purchase page.