(Read the newsletter containing this article.)

TimePilot Tap+ is an extremely versatile little guy, and he can do much more than keep track of your employees’ work hours.

For instance, Tap clocks can be useful to any organization that keeps track of hours spent on a particular project. Below is a hypothetical example of how you could set up such a system to track the timer spent on clients' cases at a law firm. Even if you don't run a law firm, this example might give you other ideas of where to use Tap clocks:

For the last 50 years at the Hatfield and McCoy Law Firm, each client’s hours have been recorded on a timesheet that accompanied the client’s file. When an attorney or staffer works with the file, they record their start and end time. Every two weeks the hours are calculated and multiplied by each employee’s hourly rate to get billing totals. 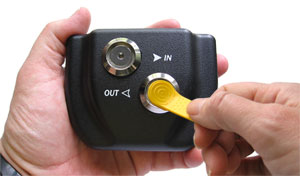 The firm puts Tap clocks on the desks of each attorney and staffer. Where convenient, the clocks are connected to the person’s networked computer with a USB cable. If an attorney will be working outside the office, he or she can toss their Tap clock into their briefcase and use it on battery power. When they return to the office, they simply plug the clock into their PC.

Each client file is assigned an iButton, which accompanies the file everywhere. When work is started on that file, the person doing the work simply taps the file’s iButton to the “In” probe of the clock; when they’re done, they tap the iButton to the “Out” probe.

With all the data in the TimePilot database, the office manager can see whose clock logged what hours and at what rate, as well as how much each client should be billed. The data can be exported to Microsoft Excel, QuickBooks, ADP or other accounting software or services.

The firm’s partners can also install the included TimePilot Central software on their PCs and track their employees’ work.

Taking the solution to the next level, let’s say Hatfield and McCoy also wants to keep a record of when a client’s file is shredded. With a Tap clock, it's no problem.

They use Velcro to attach a Tap clock to their industrial-strength shredder. When the file is brought to the shredder, the employee taps the file’s iButton to the clock’s “In” probe. When the shredding is complete, they tap the iButton to the “Out” probe.

Now there’s a record of exactly when the file was shredded.

The iButton is returned to the office manager, who prepares it for use on another client’s file. iButtons have a lifetime guarantee and can be used over and over.

Hatfield and McCoy's problems are solved:

And as a bonus, they've also added a record of when a file is shredded.

Do you have a need for a timekeeping system? Contact our sales department at sales@timepilot.com or 630-879-6400—we have the solution!