Note: Tour D'Afrique is running its fourth straight trip across Africa using TimePilot Extreme to clock its riders. Click  here to read an account of what it was like to use TimePilot Extreme on the road in Africa.

Batavia, Illinois, January 11, 2010—When cyclists pedal 7,300 miles across Africa this winter, TimePilot Extreme, a weatherproof, rugged timeclock system manufactured by Batavia's TimePilot Corporation, will be along for the ride.

The company’s product has been chosen as the official timekeeper for the Tour d’Afrique, a four-month-long bicycle race and expedition from Cairo, Egypt, to Cape Town, South Africa. The race, which started on January 15, is rated the second-toughest bike race in the world. (The Tour de France is No. 1.)

“It’s not quite what we had in mind when we designed TimePilot Extreme, but it’s a very creative use of  the product,” said TimePilot CEO Doug Marsh. “We designed the system for the building trades—so the clock can be mounted 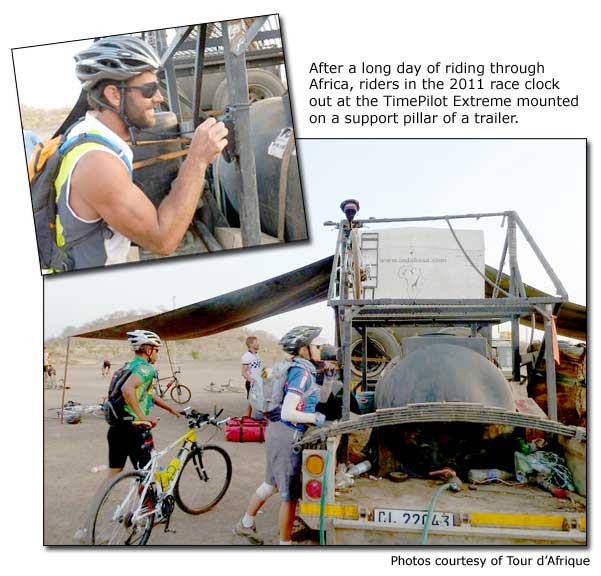 right at the worksite, indoors or outdoors, and take a pounding—but those same qualities are needed here. We’re thrilled that Tour d’Afrique saw its benefits.”

The race is one of several trans-continental bike tours run by Tour d’Afrique, Ltd., a Toronto-based company. The company also sponsors the 6,600-mile “Silk Route,” from Istanbul, Turkey, to Xi’an, China, and the “Vuelta Sudamericana,“ a 4½-month, 7,500-mile cycling odyssey from Rio de Janeiro, Brazil, to Quito, Ecuador. In each of these events, riders have the option of racing or simply enjoying the experience and cycling either the entire distance or just a section of it at their own pace.

The Tour d’Afrique features 96 cycling days or stages, averaging 77 miles each, broken up by 22 rest days and 2 days of ferry boat travel for a total of 120 days traversing 10 African countries. Stages range from 50 miles on rough terrain to more than 112 miles on the best paved roads.

The Tour d’Afrique race was first run in 2003, and until this year, the company used stopwatches or the honor system to keep track of rider times. The company tested TimePilot Extreme in 2009 and found it met their needs for a timekeeping system that can keep working in harsh environments.

Marsh said TimePilot Extreme, like other TimePilot timeclock products, is more commonly used to keep track of employees’ work hours and replaces the antiquated “punch clock.” In its most common use, each employee is issued an iButton, a nearly indestructible electronic device that fits on a keychain, and they clock in and out by tapping their iButton to the timeclock. The battery-powered clock identifies users by their iButton and records the time of the clock-in or clock-out. The information is downloaded to a USB drive, and supervisors use the TimePilot software to prepare the data for payroll. Compared to punch clocks and time cards, the system saves hours of manual calculation time, eliminates math errors and helps stop “buddy-punching.”

“On the 2010 TdA [Tour d’Afrique], plans are for all riders—full-tour riders, sectional riders and staff—to have an iButton,” said Tour d’Afrique spokesman Brian Hoeniger. ”So the timing system will serve not only for racer timing, but also for timing any expedition riders who wish to be tracked.”

For more information on TimePilot Extreme, visit TimePilot.com. To learn more about Tour d’Afrique and its races and expeditions, visit www.TourdAfrique.com.

Back to Press coverage page