A Batavia-based global business aims to change the way schedules are collected on how workers clock in and out daily from their jobs.

TimePilot Corp. has made time clocks for companies worldwide, including Tanna Farms Golf Course and Settler's Hill Golf Course, both in Geneva; Optimum Granite & Marble in South Elgin; and DePaul University Theatre in Chicago, among others. 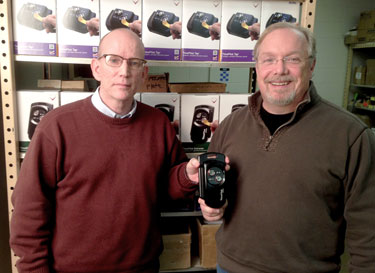 Now, the company aims to produce a new Bluetooth version of its time clock so the boss can download information to his smartphone. The new clock, called Extreme Blue, also will be weatherproof and battery powered. Employees clock in and out at their worksites, and when it's time to do payroll, the data downloads wirelessly from the clock to the boss' smartphone.

The boss will have the information needed to cut checks for employees right at the worksite. Or the data can be uploaded to the web and TimePilot's PC-based software can be used to prepare the information for the company's payroll software or service, said CEO Doug Marsh.

"The Bluetooth is so far the biggest change we've made in years," Marsh said.

Marsh helped to co-found the company in 2001 with Mike Hanlon, both of Batavia. While the company has just eight workers, they hope the new Bluetooth version of their time clock will become successful and help the company grow further.

The company also aims to raise about $30,000 for more hardware and software to develop the new product via a Kickstarter.com fundraising campaign that runs through Feb. 2. So far, the firm has developed a Windows Phone app, and is still developing other apps for Android and iPhone, Marsh said.

"Every time we've developed a new product, we had to get a loan, so Kickstarter will be a new experience for us," Marsh said. "We are hoping to get enough to cover the equipment and tooling for the new moldings."